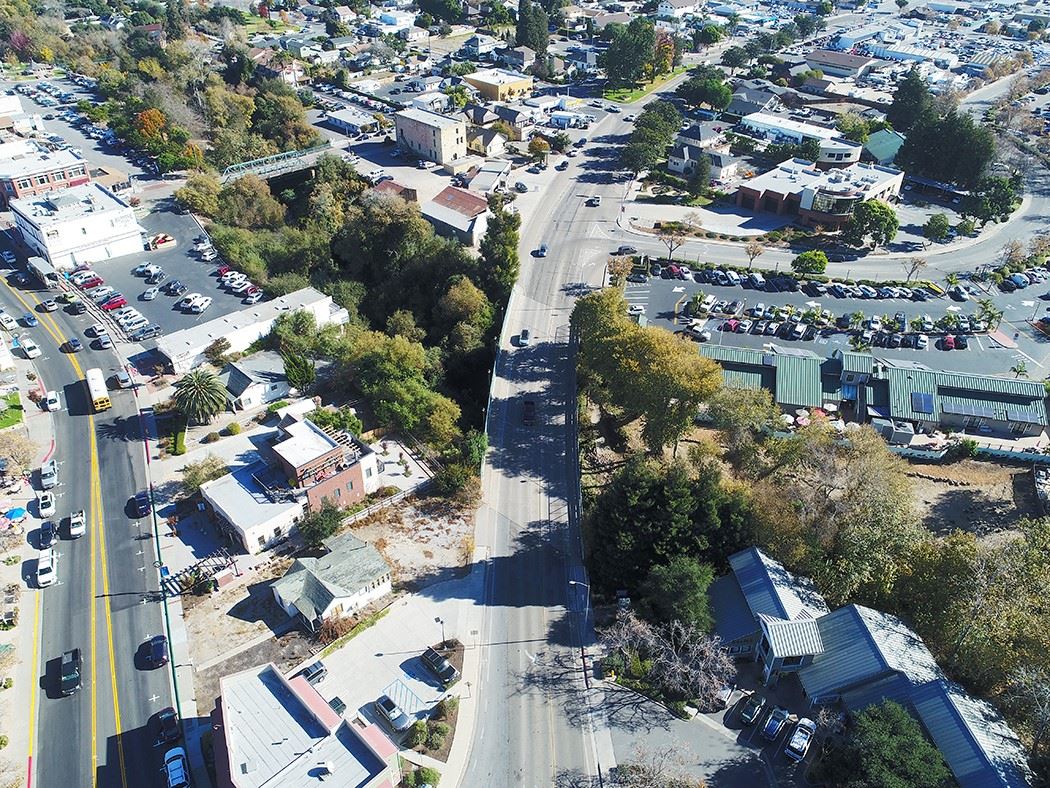 Please provide all public comments in writing either by (1) mailed or otherwise delivered to the Community Development Department, 300 East Branch Street, Arroyo Grande, CA 93420; (2) emailing twbcomments@arroyogrande.org; or (3) provided in person at a public hearing.

There is a Planning Commission Public Hearing tentatively scheduled for August 2, 2022 at 6:00 PM.

The Traffic Way Bridge at Arroyo Grande Creek, built in 1932, is a six-span structure with a total bridge length of 228 feet. This structure was originally part of the highway system and was relinquished to the City in 1960. The bridge was originally configured with four lanes of traffic but was reconfigured in 2008 to have three lanes of traffic with shoulders, sidewalks and Class II Bike Route. As a result of the channel erosion, degradation the existing intermediate piles’ supports have been exposed causing this bridge to be classified as scour-critical and in need of replacement. The conditions of the pile exposure and scour are being monitored during the project process.

What is Being Proposed?

The City of Arroyo Grande is proposing to improve public safety, update the bridge to meet current standards, and remove potential scour and maintenance concerns with a single-span bridge which will span over Arroyo Grande Creek and eliminate any intermediate supports. The replacement bridge will be built on the existing alignment of Traffic Way, and within the current City right-of-way to minimize impacts of constructing the new bridge to modern standards.

Because the bridge spans Arroyo Grande Creek, construction windows are limited to June, 1 2022 through November, 15 2022. City Staff along with emergency responders (police and fire) developed detour plans to replace the bridge with either a full or partial closure.

In order to accomplish this in a more efficient and cost effective manner, the City of Arroyo Grande City Council on July 28, 2020 unanimously approved the alternative which will result in a full-closure of Traffic Way during construction.  This will help reduce impacts of the project along Traffic Way and also reduces the overall construction timeline from two seasons to one season.

The project currently has completed the Type Selection Process. The City preference of a single-span bridge, full closure, single construction season alternative was approved by Caltrans and FHWA and preliminary design in support of the environmental documents is underway. The City has also established a stakeholder group which will be meeting directly with the project team.

How is the Project Funded?

The Traffic Way Bridge Replacement project is being funded through the Federal Highway Bridge Program (HBP), but because this bridge is considered “on-system” 88.53% is federally funded through the program and the City will be responsible for 11.47% of the funding, provided the project meets FHWA and Caltrans criteria.

The design team will continue the Environmental Clearance and Preliminary Engineering process leading to the construction of the bridge replacement. Project completion is expected in 2025. The following steps to move the project forward include:

Throughout these steps, there will be multiple opportunities for the community to be briefed and engaged on various aspects of the projects.  This website will be continued to be updated as the project progresses.

A Community meeting was held on November 18, 2021 at 6:00 pm. A recording of that meeting can be found here. You can also access a PDF of the presentation for this meeting here.